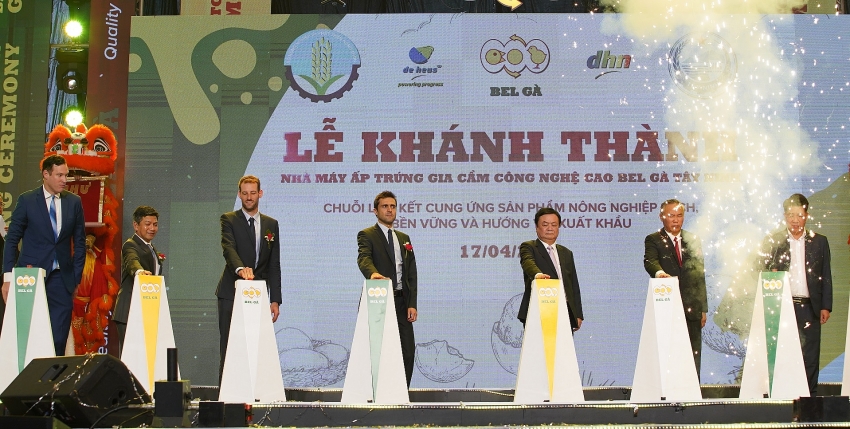 The opening ceremony of the hatchery was attended by diplomatic representatives from various nations, as well as provincial and ministry delegations, in addition to the leaderships of stakeholder companies and more than 450 customers from agents and large-scale livestock farms in Central and South Vietnam.

Bel Ga is a market leader in Belgium with more than 80 years of experience in producing premium day-old chicks in Europe.

Established in Vietnam in 2013, Bel Ga currently has four hatcheries and two incubation factories with a modern self-contained farming process according to Global G.A.P standards, providing more than 35 million premium day-old chicks for the Vietnamese and Cambodian markets every year.

Possessing strong potentials and unique experiences and visions, in September 2017, Bel Ga and De Heus LLC, Hung Nhon Group, Koyu & Unitek Co., Ltd., and partners were successful in building a value chain of clean chicken with traceability according to Global G.A.P standards, ISO 22000 that meets conditions to export clean chicken products to Japan – one of the most demanding markets in the world.

Following the success of Bel Ga’s incubation factory in Lam Dong province, Bel Ga JSC has invested in the second Bel Ga high-tech hatchery in Tay Ninh – a province which is part of the key economic region of South Vietnam, with the advantage of a temperate climate, relatively flat topography, and undeniable potential for comprehensive development in agriculture, industry, and construction.

Kris Van Daele, general director of Bel Ga Vietnam and Cambodia, said that this position improves the quality of broilers, helping to reduce the pressure on chicks due to long-distance transport, as the facility cuts transport time to the Mekong Delta areas to 4-5 hours and Cambodia to only 1 hour. In addition, the distance from Tay Ninh to Ho Chi Minh City is also very short so it is possible to transport chickens by air to the north, which sets the premise for Bel Ga’s development in the north of Vietnam.

The main products of the factory are day-old chicks and day-old layers of the best quality to meet the demand of famers in Vietnam and Cambodia.

Bel Ga breeders are sourced from the world’s leading breeding companies Aviagen and Hendrix Genetics and are hatched using the most advanced modern European technology. The Bel Ga Tay Ninh factory is a unique factory model with the application of many advances in technical innovations of construction design, including facilities for farms and hatcheries which meets the European standards, thanks to the support of leading experts and technicians in the world.

All technologies used in the factory use technology to ensure the efficiency and accuracy of information in the production while at the same time investing in modern machinery and equipment.

Embryo-Response Incubation, manufactured by Petersime Belgium. With the OvoScan system, the incubator temperature is continuously adjusted according to the actual eggshell temperature.

CO2 concentration management: Accurate maintenance of CO2 levels throughout the incubation cycle has a positive effect on the development of the circulatory system of the embryo.

Energy management produced by Petersime, Belgium. Eco-Drive helps to reduce the energy consumption of the engine pulses during the less critical stages of the incubation process.

Petersime’s pressure control system allows the regulation of the amount of air circulating in different areas of the incubation plant.

Monitoring and control produced by Petersime: Eagle EyeTM surveillance system is a package of software programmes that monitors and controls the entire incubation process from a central host computer station, including an incubator, room ambient conditions, water temperature, and air circulation system parameters, among others.

The day-old-chicks products of Bel Ga Tay Ninh will ensure the highest standards according to Global G.A.P standards through the management and strict control of biosafety in livestock and the production, quality monitoring of incubation eggs and GP farms with low stocking densities, combined with effective temperature control through modern incubation machines helpful in the creation of optimal environment to ensure that the best 1-day-old chicks are always produced and traceable throughout the entire production chain.

In recent years, Vietnam’s poultry production has made great leaps in both productivity and product quality.

Fully complying with the guidelines of the government and ministries, as well as the orientations of potential provinces, the Bel Ga Tay Ninh poultry incubation factory promises to become a strategic knot, contributing to the development of the value chain of high-quality breeds, clean meat production with traceability and export standards, bringing many benefits to Vietnamese farmers and consumers.

Bel Ga and partners will continue investing in a $141.5 million high-tech agricultural complex including two parent chicken farms (capacity of 25 million eggs a year), 250 safe broiler farms (25 million broilers per year), and a complex of factories producing and processing high-quality agricultural products in a closed chain.

The entire breeding process at the project will be operated and monitored according to European standards to control the quality of livestock in the area, optimise livestock performance, and reduce product costs and achieve high economic efficiency.

The project is equipped with a system of Europe’s leading automatic production lines, which are strictly operated and supervised by international experts.

Once completed, the project will become a high-tech application centre in broiler farming for export in a closed chain, including the supply of broilers, broiler rearing, slaughtering, and trading meat products. The project will create job opportunities for 350-500 local workers and transfer advanced breeding technology to hundreds of workers, promoting the development of high-tech agriculture in the locality.

It also reaffirms the long-term vision of Bel Ga, De Heus Group, Hung Nhon Group, and partners to contribute to the development of a sustainable and prosperous Vietnamese agricultural sector, improving the quality, added value, and competitiveness of agricultural products, as well as environmental and ecological protection. It will also improve the incomes of people in rural areas and ensure food security and national security in Vietnam while improving the position of Vietnam’s livestock industry and creating high-value products that are competitive in the international market.